Embarking on their first ever summer tour, Ireland are currently getting used to Japan’s high humidity as they train in Shizuoka ahead of next Saturday’s series opener against the Sakura Fifteen.

The 29-strong touring party includes ten uncapped players, seven of them in the backs division, and a promising quartet of sixth year students who are coming off the renowned midlands rugby conveyor belt.

McWilliams has praised the work being done at Tullamore and Tullow Rugby Clubs in particular, in producing this crop of young players who already have the athleticism and game nous to press for international honours.

“They’re talented, they’ve got really good footwork,” he said of the uncapped youngsters, which include Tullamore duo Aoife Dalton and Leah Tarpey. “Good game awareness, good contact. I just want them to be able to express themselves and there’s no pressure on them.

“There’s nothing to lose for this squad. We’re not going to the Rugby World Cup. This is a chance for us to get ahead of the chasing pack and establish ourselves.

“We’ve seen in the past that post-Rugby World Cup in the Women’s game there’s a high turnover of staff and players, so for us now it’s about establishing our pillars, being really clear on our vision and to see these young players play .

“Wait until you see some of these girls play. Four of them are from Offaly. It’s unbelievable, Tullow and Tullamore, the work that they’re doing in the midlands is outstanding. It’s a story within itself.

“There’s a lot of coaches that have been down there for years, just doing so much good work. We’re seeing this talent coming through. They’ve been involved in the Leinster underage set-up, they’ve played for the Irish Under-18s now.

“The game is changing and we’ve got these athletes that are ready to rip it up and I can’t wait to see them play. So excited.”

As well as a freshness to the playing panel, the Ireland set-up has been bolstered for the tour with the addition of vastly-experienced coach John McKee and former Munster and Ireland ‘A’ prop Denis Fogartywho is overseeing the scrum.

The involvement of Ed Slattery and Roisin Murphy in the backroom staff is also a key step in the right direction, with McWilliams acknowledging: “Really happy with the staff that we’ve assembled. Kind of under the radar, we have John McKee in with me.

“He was the Fijian men’s national coach for two Rugby World Cups. He’s coached Connacht before, he’s coached in Clermont. I’ve worked with John in the past and we see the game similarly.

“He’d worked with Dave Nucifora before. He’s come in now and he’s been just outstanding. To have him with me is truly excellent. so, Denis Fogarty is in as our scrum coach which again is another really important appointment.

“I think the relevance of that and the importance again from a growth point of view is that it’s the first time that we’ve ever had a full-time head S&C coach and a full-time physio with the programme.

“That’s significant because the care that the players are getting has always been there, but now it’s just gone to that next level. Once the squad was announced, everything ramped up as you’d expect.”

World Cup-bound Japan were beaten 15-12 by Ireland at the RDS last November, a match which saw retiring captain Ciara Griffin claim two tries in what was Adam Griggs’ last fixture as head coach.

The first tournament of McWilliams’ coaching era ended with a thrilling late victory over Scotland in Belfast, Enya Breen slotting over a crucial conversion as the girls in green doubled their win tally in the TikTok Women’s Six Nations.

Seeking to keep up that winning momentum and make further overall progress, this two-Test tour will be a good barometer of where Ireland currently stand as Japan have had some very good results so far in 2022.

They come into this series on the back of an unbeaten tour of Australia in May – they beat Fiji 28-14, the Australian Barbarians 24-10, and the Australian national side 12-10 on the Gold Coast – and also played South Africa at home in recent weeks.

Lesley McKenzie’s charges won 15-6 in Kamaishi, in what was their first Test on home soil since 2017, before South Africa gained revenge by winning the second showdown, taking a 20-10 verdict in Kumagaya.

Asked about his ambitions for the two upcoming TG4-television Tests, the Ireland head coach explained: “We’ve had a group of players that have been training for the majority of the summer. We had a camp before departing for Japan and the energy has been really impressive.

There’s definitely been an increase in our execution rates and our all round energy which has been really important.

“We’re just looking to have fun as well as being very serious about being competitive for two Tests, so it’s about getting that balance right on any tour.

“We want to show people what this team is made of. We can’t wait to get stuck in with the two Tests.” 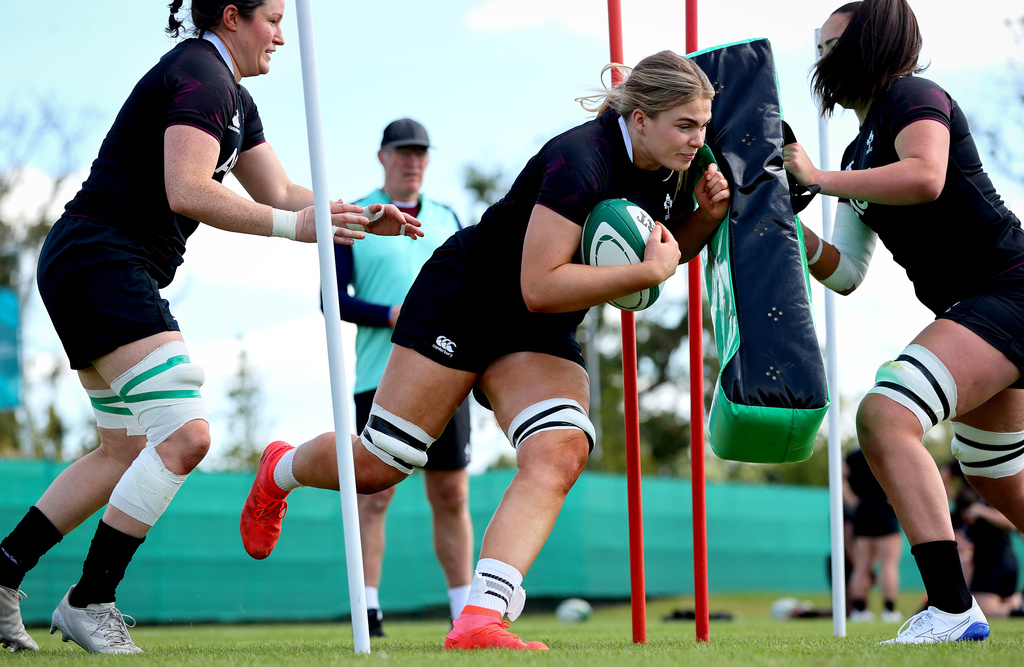 He added: “We had a particular vision, myself and (captain) Nicholas (Friday) would have sat down with the senior leadership (group), who have a vision about how we want to play, how we want to inspire and how we want to represent the country.

“We’re just strving everyday and this is another chance to get there. I am buzzing for the series because a lot of work has gone into this tour, behind the scenes, from Dave Nucifora, from Gillian (McDarby) coming in (as the head of Women’s Performance and Pathways).

“For a bit Katie (Fitzhenrythe Women’s Performance Pathway coach), the work that Gemma Crowley (the national team program manager) is doing is phenomenal. So many people are contributing to this. I think that’s what is making it really special, there’s so much collaboration.

“It’s exciting for the players and I’m just so proud of them and how much work they’ve put in. It’s really inspirational and I hope they can go out now and hopefully do well in Japan, that’s the plan.”