Bocce appeals to cultures throughout the world, from Europe to South America. But Italy lays the biggest claim to the pastime that combines elements shared with other leisurely games like bowling and croquet. In the US, bocce became most associated with Italian immigrants and has since grown to include fans and enthusiasts across the country.

The sport has a place in Pittsburgh as well, something that will be highlighted when Heinz History Center hosts the Bocce Tournament & Festival. The event, taking place Sat., Aug. 20, adds to a local scene showcased in various tournaments and leagues.

In a press release, Heinz History Center defines bocce as a “bowling sport of precision and accuracy,” adding that it was popularized in Pittsburgh by Italian American immigrants who “settled in the region at the turn of the 20th century.”

“By providing a venue for socialization, bocce helped immigrants preserve the language and customs of the Old World and provided an important link for young Italian Americans to learn more about their past,” it reads.

The sport has persisted in neighborhoods like Morningside, where a small bocce court resides behind the St. Raphael Church, and in Kennedy Township with a league that, according to its website, formed in 2007 and now boasts 32 teams with over 180 members.

While previous versions of the Bocce Tournament & Festival took place in the Strip District, not far from the Heinz History Museum, this year will see it played out at a new location, the South Endzone of Acrisure Stadium (formerly Heinz Field). In the double-elimination tournament, 36 four-person bocce teams will compete for first place.

Proceeds from the Bocce Tournament & Festival will benefit the History Center’s Italian American Program, described as being “dedicated to preserving the history and culture of Italian Americans in Western Pennsylvania.” 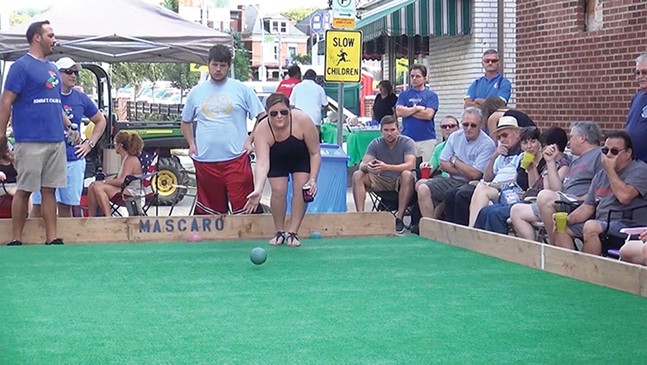 A 2016 Pittsburgh City Paper article about the Little Italy Days tradition illustrated how the tournament gathered players from different generations, with one participant calling it “a very nice tournament where people young and old get together and try to match their skills.”