BENTONVILLE– You can hear the pulsating beats of the music well before you arrive at Sugar Creek Airstrip, no matter how you get there–by shuttle, bike or foot.

Last night was the opening of FORMAT Festival, the brand new, three-day experience of music, art and technology that includes roughly 80 musical acts and 20 art installations and people arrived from all over to see Friday night performances by Nile Rodgers & Chic, The War on Drugs, Phoenix, Fatboy Slim and many others.

The inability to drive your car up to the location automatically makes it a more communal experience. Sitting next to others, you can easily meet people you don’t know on the 10 minute shuttle from David Glass Technology Center, or have jovial conversations as you and a band of friends walk your way in.

Once inside, you’re hit with a zoo of light, sound and color. Festivalgoers are dressed in all manner of brilliantly colored and patterned things: shiny materials, neon swimsuits, an illuminated rainbow cape, a taxi cab driver hat. Others have elaborately painted faces, arms wrapped in glow sticks or cart staffs, rockets and more kitschy accessories.

Artist Kat Wilson came up with the solution when she made wearable “Titty Bags” in what she calls a “ridiculous, nonbinary art project” she conducted with friend and local crochet artist Tina Oppenheimer.

Oppenheimer, she noticed after a few instances, had a habit of letting one breast go exposed in key photographic moments and so they collaborated on the pattern and creation of a wearable pair of breasts as a fun expression of Party Art, Wilson’s term for participatory art .

“Everyone who wears them is a part of the project,” Wilson said by phone on Friday, likening it to an NFT, a unique token to take away from the event. The bags are priced like art too, at costs of $125. The pair made about 50 and will be selling them throughout the three day festival. As an added benefit, Wilson says it makes it more difficult to be pickpocketed.

Six stages are on festival grounds. North of Oz and South of Oz are the largest, most traditional of them all where the biggest names play their sets. DJ sets, local musicians and others took smaller stages and nontraditional spaces at Drag Me To the Disco, The Cube, Smokey’s–placed further into the woods–and Next Door.

The options are plentiful. If you stay to the end of a set, you can look at it one of two ways: you’re either later for something else you want to see, or you’re never without a performance to watch.

The War on Drugs played the South of Oz stage at FORMAT Friday to a packed crowd that extended well past the general audience area. A wide open expanse of field sits in the center of the grounds marked by a series of posts with lighted signs that read “We rise by lifting others” and “Dance first, think later.” Much like the old location of the AMP, audience members can take their blankets to the field and settle in to listen to the music. You can hear it just fine out there beyond the big crowd, even if you can’t see as clearly. Large screens on either side of the main stages livestream the bands as they play.

Standing in the middle of the grounds, you can see the edges of so many unique things that make up FORMAT– lights streaming from the signature, reflective hot air balloon; , rainbow colored columns covered in enormous hair, part of Icelandic artist Shoplifter’s installation “Xanadu”; and Pia Camil’s large fiber work.

French indie pop band Phoenix took the North of Oz stage just after 9 pm last night with an ASL interpreter and played many of their well known hits–Girlfriend, Lisztomania, Armistice– as well as tracks from their upcoming album Alpha Zulu.

“We’ve never been to Arkansas, not even close,” lead singer Thomas Pablo Croquet said in between songs. Croquet expressed his awe at Phoenix being asked to follow well known acts he respects, such as Nile Rodgers and Chic and thanked everyone for welcoming him here.

Visual aspects played a strong role in Phoenix’s set, with a series of frame/border like screens surrounding the band. From the central view of the audience, the combination was a virtual background that changed from pastoral with columns to patterns like polka dots and stripes and finally to a video clip to the burning of a jersey-like garment with “PHOENIX” on its back.

During an instrumental track by the band, a pack of drones took flight next to the North of Oz stage. The autonomously flying swarm of hundreds of drones, by pioneering drone artist Studio Drift, was based on a biological algorithm from more than 10 years of research into starlings’ flight behavior. 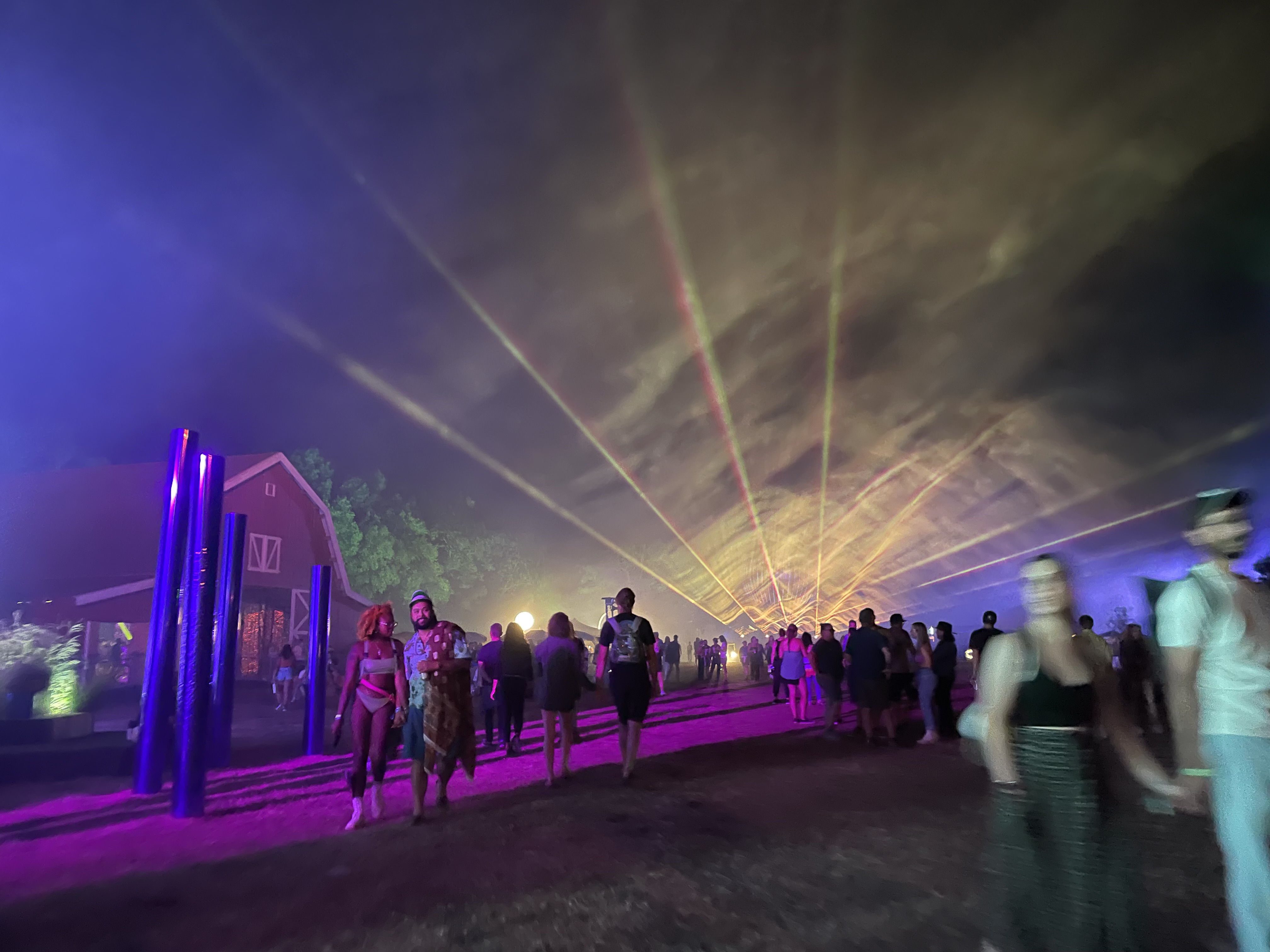 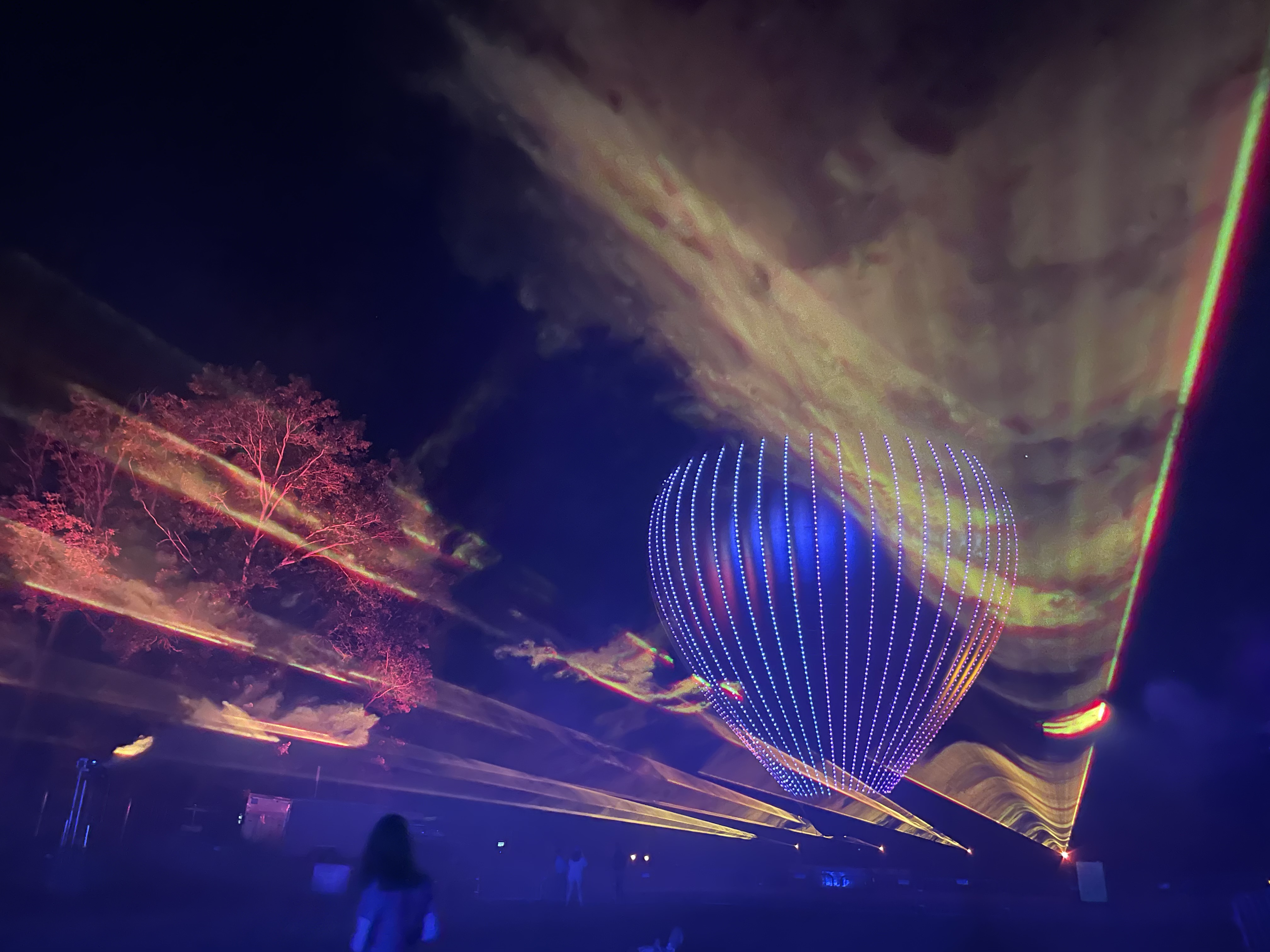